Visiting the Holocaust Museum has been top on our list of things we wanted to do. Our tour book indicated they were not open on the weekends, but, as it turns out, the Museum IS open on Saturdays and Sundays from 9:00 to 15:00.  Finally, we were able to visit the museum today.

Macedonia lost the highest proportion of its Jews than any country in the world -- 98% were murdered during the Holocaust. This was the most complete annihilation of the Jewish community anywhere in the world.  During the Bulgarian occupation of Macedonia during WWII, Jews were sent to their deaths in the Treblinka Concentration Camp in Poland.

There is a brochure about the Museum here:
http://www.holocaustfund.org/docs/Brochure_Holocaust_Memorial_Center_of_Jews_from_Macedonia.pdf

In reading the brochure I learned that the site of this modern museum is where the Jewish Quarters were once located in Skopje, beginning in the 15th century. I also learned that it was 74 years almost to the day that the tragic deportation took place on this site. (It was March 11, 1943 -- and we visited March 12, 2017)

I was expecting the exhibits to start in the 1930s; instead, the exhibits started in the 1490s, with the expulsion of Jews from Spain and the Iberian Peninsula and their migration to the Balkan Peninsula, followed by life of the Sephardic Jews during the Ottoman Empire. It was not until we got up to the third floor, that we first saw the black and white pictures of Jews who were required to register with the Bulgarian authorities.

At the end of the pictorial exhibits there were computers and headphones where my daughter and I were able to listen to oral history interviews with survivors of the Holocaust from Macedonia. Powerful.

You can find much information about Jews in the Balkans and about the Holocaust in Macedonia on the Museum's website. Resources also include links to videos.

We could not take pictures inside the museum, but you can see what it looks like in this BBC News segment filmed when the museum opened:  http://www.bbc.com/news/world-europe-15979551 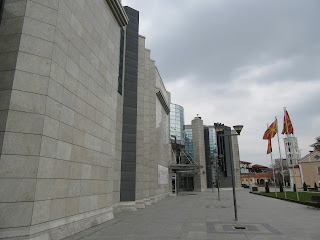 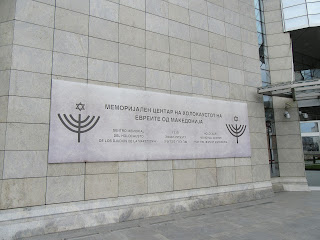 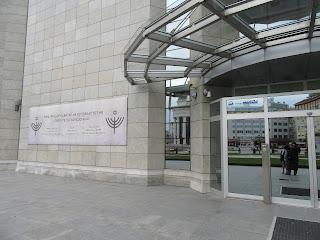 The United States Holocaust Memorial Museum has oral history interviews with survivors who now live in Skopje, and you can watch them here:  https://collections.ushmm.org/search/catalog/irn44519

For more about Treblinka http://www.pbs.org/wgbh/pages/frontline/shtetl/treblinka/
Posted by J V Scourfield McLauchlan at 11:08 AM